Florida Biologist, Environmental Scientist, Naturalist, Explorer and Photographer Brent Anderson has been hooked on photographing the natural world for over 25 years.  Brent picked up his first film 35mm camera as a freshman in high school and spent the next 8 years studying Black & White photography, building a photography foundation that later transitioned into his career and his livelihood.

Growing up in the forests, streams and swamps of the Allegheny Mountains in northwestern Pennsylvania ignited Brent’s drive to pursue an education and eventually a career to study and protect the natural environment. Completing a Master’s Degree in Environmental Science at Florida Atlantic University lead him into a career as a biologist on the largest river restoration project in the world…The Kissimmee River of the Northern Everglades. Now, for over a decade Brent has been working as a scientist, studying and photographing throughout the entire Everglades ecosystem as well as the south Florida coastline and the Islands of the Bahamas and the Caribbean. 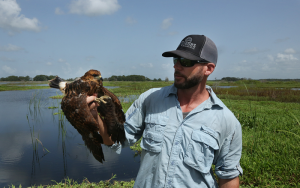 Author and photographer for the book The Northern Everglades, along with Brent’s pursuit for adventure, exploration, discovery and conservation has earned him national recognition for his captivating fine-art metal prints of the natural world.  Join Brent in his efforts to make a difference with his photography and environmental conservation. He is committed to dedicating 5% of all sales to preserving our natural resources from development and habitat destruction.

Join our newsletter today and stay up to date on new releases, upcoming events, special offers and more. Thank you for supporting Brent Anderson Photography.

Powered and Designed by: Say So Marketing